I initially started listening to RVL when my friend Jenija, suggested me to tune into AMPED saying I would love the show. She said head onto www.rvlradio.com.I was like radio? serious? anyways I opened the link and tried to listen, and first set back for me was it used windows media player codec and I was in Linux which didn’t support it out of the box, however I borrowed my dad’s laptop and tuned in. Now, when I think of it that was one of the best decision I took. The songs were of my genre and the presentation by voice Ashish was so cool, I was banging my head and laughing at the same time.

Nextday, I setup my linux system to play the radio and I broke my openSource vow not to use commercial software or a plugin, but it was totally worth it. Initially, I only used to tune into AMPED, then one day I tuned into SOUL with voice Elisha. I requested a song and dedicated it to my friend, and she was like change your name she won’t be able to pronounce it. I do have the weirdest of the name, but it is something I love dearly. However, to my or our surprise, she pronounced it perfectly and that was probably one of the happiest moment in my life (seriously). Then I started to listen to almost every show, and next in line was playlist with voice Shikha (who turned out to be my fav Voice), and she too pronounced ‘smjrifle’ perfectly, and after that there was some discussion on twitter, about why complicate a simple name between her, my friend and me. Then I started to listen to Voice Roshni, Swarna, Mandira, Prasan and all had their own presentation style and everyday there would be something new. What I really love about this radio is the crazy talks and interactions, they really get connected to the listeners. I remember sending voice Shikha some really complicated and weird requests and she took in all, so did others. With rvl you get 8 hours of complete non stop fun, gossips and talks along with lots of beautiful songs and Taylor Swift. 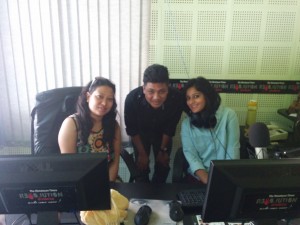 For me, rvl really has been a part of my life, every morning, I listen to the show while reading my news or working on some alien stuffs and it always brought smile on my face. Every night, I come home from work tired, I tune in to get that energy and fun. I have added lots of songs to my playlist by listening to the shows. I have had some funny moments with them, they’ll bring that smile to your face no matter in what mood you are in. I have been lucky enough to have visited the studio, however they do have a revcam if you want to check out the studio or times when voices are cursing the listeners, kidding, they never do that. RVL is composed of the friendliest of people and they will do anything crazy for their listeners. Everyone that listens to this radio, becomes a part of it. It is indeed the next generation of entertainment and a friend that sings for you and comes to you everyday with something new and crazy. Thanks to Jenija for showing me one of the coolest station 🙂

No respect. No intelligence. No life.