We humans have habit of dividing ourselves, be it with gender, caste, religion, profession, race. In my view, the most underrated and deadliest is religion. Well I am an Atheist, I just don’t believe in religion and their values but I don’t say people from any religion or gender or race is bad. There are bad people, not bad race or gender or religion. However, I am living in a society where there are people following different religions, I have had to deal with them in my daily life. To be fair, the current generation doesn’t seem to car much about these things, but there is always something holding them back when they need to do something that is not permitted in their religion but is permitted in some other religion. I can see signs in some temples, “Only Hindus Allowed”. I really hate these sights, we talk about bigger, better and united world but we are pushing ourselves backwards.

We say racism is bad, is it time for us to say religion is bad? If neglecting and speaking bad about some other race is racism, speaking about some other gender especially female is dominance, then what is the act of neglecting other religions and following just yours called? Isn’t it just like racism, where people just care about their group and ignore and neglect others. I know many of us celebrate christmas, cause it colorful, but what about Eid and other festivals? Do we give it equal importance. I am raised in the hindu society and you can see even I, who calls myself an atheist couldn’t think of any other example, I am stuck with thinking like a hindu does. Dashain, Tihar seems like our festival, christmas something we cherish, rest we don’t bother celebrating. In my college, one teacher gave answer like “only muslims write anticlock wise” to a simple question “Can that object in computer spin clockwise only?”. Well it’s not only hindus, I had lived with people from other religions as well, and well they refuse to buy meat from a shop whose shopkeeper is not of their religion.

Is it good, is it bad, is it just my thoughts.. well I seriously don’t know. Whenever someone talks about their caste or religion, I get real angry and shout shut up, I don’t really care what are you, who are you, all I care is can I just remember your good attributes and forget bad ones. I have heard stories about different caste battering other cast, I have seen people with different religions fighting. How many wars are based on plain religion? If you just care for your religion or caste and discard others even in your heart, you are a ‘RACIST’. Why can’t you follow or unfollow them all, or even better not think about it, afterall we all are human beings and we all have qualities that defines us. Let’s kick out any inequality, even the thoughts, when you meet someone, don’t think she is of some religion or caste, just adore her for being beautiful, unless she gives you a “go away attitude”, then yeah you can stop adoring her :), still don’t include her in any caste or religion or race. Oh! damn I did a gender there 😛 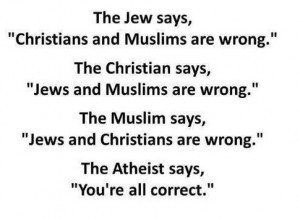