Edward Snowden had reaveled that NSA are SPYING on us using big tech giants such as Facebook, ADT Security, Apple, Verizon, ATT, OnStar, and to some extent Yahoo, LinkedIn, Google, Microsoft. All phone calls, text messages, facebook updates, emails are accessible directly to NSA. They are building a spy center at Utah which is rumoured to be 7 times Bigger than the Pentagon.

Protest was organized on 11th Feb, 2014 against mass surveillance program by NSA. People from around 15 countries marched up to the street holding banners “Stop Watching Us”, there was also mass protest in internet with support from tech giants such as DuckDuck GO, Mozilla, Tumbler, Reddit, Twitter and various others. 86,000 phone calls, 163,859 emails, 220,182 signatures and 700+ visitors were registered in an effort to end global mass surveillance. The protest was held on http://thedaywefightback.org/ and also many websites such as piratebay kept the banner for people to sign petition or make phone calls and emails. The protest kept on going with Anonymous and Civilians giving their thought to NSA about “Mass suspicionless surveillance”.

While lots of Activists were busy protesting online or on the streets, the response from tech companies were some what disappointing; Google, Microsoft, Facebook, LinkedIn, AOL and Yahoo didn’t show any support on their own sites, (Google and Microsoft did write blogs supporting the protests). Wikipedia was completely absent this time around.

This isn’t the first time people/group has protested against NSA spy, there has been effort from various groups collectively in different frame of time. Korn released a music video “Spikes in my veins” which was direct message to the US Government, “Stop spying on us”. The online hacktivist “Anonymous” has been declearing global war on U.S. Goverenment for injustice. A group of Brazilian hackers took their anger and hacked the NASA website (they mistakened NASA for NSA) and posted the message “Stop spying on us” on their website.

#TheDayWeFightBack movement might not have been grand success but, over 86,000 calls went to 535 congress members, clocked 8,000 calls/hr midday suggests it was a victory and it did start something. It will be interesting to see how the government reacts to all these protests, If you wanna fight the surveillance and believe that people are the power not government and if you want freedom and privacy, make your voice heard. 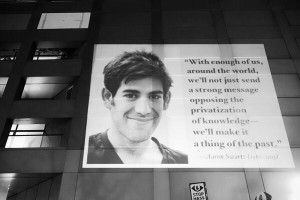